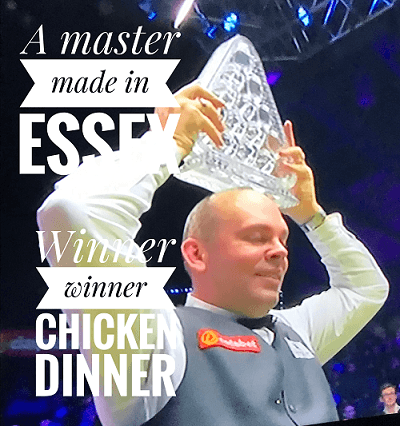 Stuart Bingham found top gear to claim the 2020 Dafabet Masters at the Alexandra Palace in London on Sunday night – despite being 7 – 5 down to Ali Carter and looking out of it.

The Ballrun, 43, pulled himself together after an onslaught of relentless play from his opponent Ali Carter who went to the mid-session interval in the evening 7 – 5 up after being 5 – 3 down in the afternoon.

But, we all know that intervals can change matches, and this one was no exception as Stuart then lived up to his nickname reeling off frames quickly. His final frame he needed at 9 – 8 to win 10 – 8 saw him finish off the match in style with a magnificent steely century.

Bingham almost broke down in tears after, in his post-match interview with Hazel Irvine from the BBC as she pointed out it would be another “big” chicken dinner win for him since his historic World Championship win in 2015 against Shaun Murphy.

He also added in the interview: “I’m shattered”, saying he had only got nine hours kip in his last two matches or so.

He now has two of the three triple crown events on his CV with just the UK Championship eluding him, which he admitted after was now a target to aim for to complete the set of majors.

For Ali Carter, yet to win a major, although a runner-up in the World Championship losing to Ronnie O’Sullivan, it was a remarkable story of a player who only managed to get into the event because Ronnie O’Sullivan had decided not to enter ironically.

Asked if Ronnie would be on his card list after bagging 100K for the runner-up prize, Ali quipped: “Ronnie’s always on my Christmas card list.”

This is the third year that the Masters has seen a new winner with the last two years seeing the likes of Judd Trump win the Masters, and Mark Allen win a major.

The 2020 Masters provided drama all week as the very top guns fell quickly in the first round of the 16 man event, with some nail-biting matches including seeing Stephen Maguire come back from 5 – 1 down to beat Australia’s Neil Robertson 6 – 5.

Bingham bagged a whopping 250K for the event.