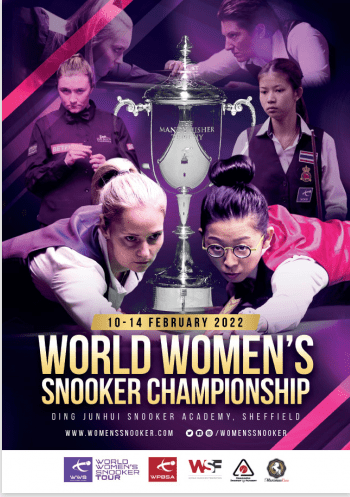 The 2022 World Women’s Snooker Championship main event gets underway today as the group stages begin with 2 players from each group of five progressing to the final stages.

There are 11 groups, with the tournament ending on Monday 14th February.

Davidson, after a long bout away from snooker since the 90s when she competed in the World Women’s event, returned, and she said on Facebook: “Thrilled to have won the World Seniors title. After a long break from snooker, it feels good to be back!”

And in the Under-21 event, 19-year-old Ploychompoo from Thailand scooped that event with a win against Australia’s Lily Meldrum 3 – 0.

Woking’s Jasmine Bolsover, 22, is playing in the main event in the same group as the talented 19-year-old Thai Ploy in Group J.

Reanne Evans and Ng On Yee are playing in the event but should one of those win the tournament, the next available tour card will be awarded to the next on the list as Reanne and Ng are already now World Snooker Tour Professionals. A new Champion other than Reanne and Ng would get a place on the tour.

The events are being held at the luxurious Ding Junhui Academy in Sheffield and practice areas of the Victoria Snooker Academy in Sheffield near the Crucible, where the likes of Chinese players former Masters and current UK Champions Yan Bingtao and Zhao Xintong practice.

Snookerscores has the list of groups and players competing – here…

Good luck to all those competing in the main event and over the next three days.