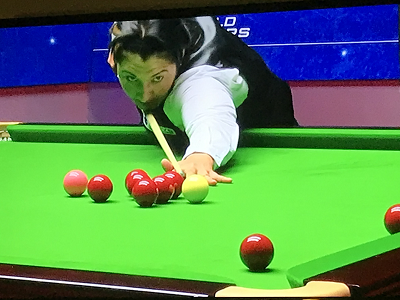 The 2022 Ways Facilities Management World Seniors Championship got underway on Wednesday and runs until Sunday.

The first two days have seen a string of amateurs and former professionals pit their wits to play some of snooker’s iconic players in the last 16 such as Jimmy White, Stephen Hendry, and John Parrott.

The highlight of the first round was seeing the former World Women’s No 1 Maria Catalano, 40, become the first female to play at The Crucible Theatre in Sheffield in a World Seniors event.

She played Egypt’s Wael Talaat, 66, who was also making his debut in the Seniors – and he got off to a flyer in the first frame with breaks of 40, and 81. An impressive run of potting and cool steel saw him win the first.

It was a nervy start for Catalano, cousin of Ronnie O’Sullivan, as the best of 5 got underway, but she had a nice long pot in the second, but couldn’t quite get the chances she needed to get on a run. Talaat won the second in a scrappy affair.

However, Catalano settled down in the third and made a steely break of 50 to see her in contention in the frame, but a missed black – and a bit of a scrap at the end and Talaat eventually booked a place into the next stage of the event.

12-times World Women’s Champion Reanne Evans was in the theatre of dreams cheering on her pal Catalano, who has been a World Women’s finalist 5 times and 11 times ranking winner.

Now retired player Nigel Bond, the 1996 British Open winner was in good form, and former professional Michael Holt are in to the last 16 stages of the event which begins today.

David Lilley is the 2021 World Seniors Champion and will play one of three Welshman in the event, Phillip Williams.

The quarter-final and semi’s are best of 7.

The final on Sunday is best of 9.

DAY 3⃣ | The seed players appear as the last 16 of the 2022 @waysfmuk World Seniors Snooker Championship gets underway this morning.

We break off at 10am with defending champ David Lilley facing Philip Williams.