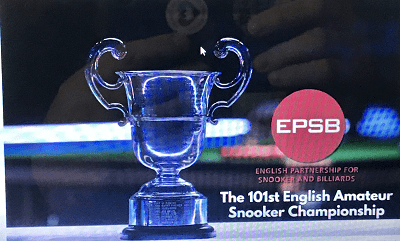 The 37-year-old Grimsby cueist, who was a pro in 2016/18, has earned a maiden spot in the event – alongside John Welsh to be played later on this year.

The event, first played in 1916, has throughout the years been won by some illustrious names, such as Terry Griffiths, Stuart Bingham, Martin Gould, and Jimmy White, one of a handful of players never to have gone on to win the World Professional Championship but appeared in six World finals.

Curtis Barrett has had a roller coaster of a year or so off the table – according to his Facebook page, with picking up a new girlfriend, and also testing positive for Covid before Christmas.

57-year-old Welsh also earns a maiden spot in the event.

Several players have gone onto win ranking events after having been either winners or runners-up in the most prestigious amateur event still in snooker.

Joe O’Connor won the event back in 2018, and it was his last amateur event – with a win – before turning pro. He has gone as far as semi-finals in a ranking event since being on the tour.

Details of when, where the final will be played are expected soon…