Jester from Leicester Mark Selby has returned to the winner’s enclosure after a year-long drought of winning World ranking titles.

The 36-year-old scooped the 2019 Home Nations English Open after thrashing David Gilbert 9 – 1 at the K2 in Crawley.

But for Selby, it means he has booked a place into the lucrative Champion of Champions event which will begin in just under two week’s time.

China’s No 2 player Liang Wenbo won the first-ever English Open fending off Englishman Judd Trump in the final in 2016, with that famous celebration at the end.

Then in 2017, it was Ronnie O’Sullivan. And then, in 2018, the 2015 World Champion Stuart Bingham picked up the Steve Davis Trophy, named after the winning machine player of the 1980s.

The English Open win is Selby’s 16th ranking title with his last being the 2018 China Championship.

Mark is a brand Ambassador for Century tips.

Read the SnookerZone review of the Century G5, in Equipment reviews, here… 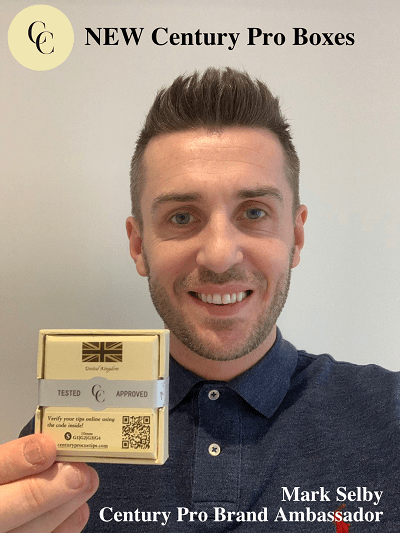 The creators of the Century G range of professional cue tips have announced an exciting new partnership with top scientists at Sheffield University.

It comes as the company, based in Sheffield, the home of snooker, have already created innovative and successful products for the last three years such as the G 1 – 4 range of snooker tips and the G5 this year in 2019.

The partnership seeks to produce further revolutionary snooker and cue sports products beyond 2019, and to get to the science behind snooker in the lab!

Already, Century have been producing tips, titanium ferrules, and other top products as well as getting top class World Champions on board to promote their products.

Both 3 times World Champion Mark Selby is a brand Ambassador for Century and Mark Williams have been using their G range of tips, as have other professionals and top amateurs.

“We are looking forward to working with Century Pro on the science of snooker, It is wonderful to link-up with such an innovative, cutting-edge company.

We will look to develop a better scientific understanding of how snooker works and hopefully revolutionise various aspects of the sport. Sheffield is the home of this great sport, so it’s great to connect University Of Sheffield with a dynamic local partner like Century Pro”

“it’s excellent news for the CC brand. We now have the financial power of the University of Sheffield behind us and some of the brightest minds working directly with us. Our first project begins this month!”

Haven’t read the EXCLUSIVE  snookerzone review of the new G5 tip yet?

READ ALL ABOUT IT HERE…